It's the most-asked question about Jelly Rolls.  About pre-cuts.  Where do you line up the fabric for the seam allowance?  On the inside point of the pinked edge?  On the outside point?  What happens if it's worn down a bit?  ACK! 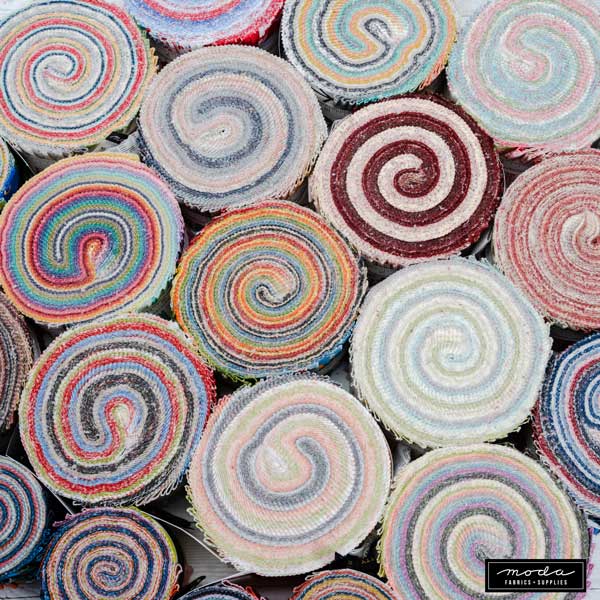 If the pinked edges are clear and sharp, pick a point and be consistent.  If the outside points are your guide, use that every time you join strips.  The same for the inner points, or an in-the-middle spot.  Consistency is what matters.

If the pattern requires making strip sets, consider using the tip we shared with this Jelly, Honey & Accuracy post.

The second most-asked question is why Jelly Rolls - and other pre-cuts - have pinked edges.  Lint.  Or frayed edges?  If a Jelly Roll were to stay individually wrapped in plastic until it was used, the edges would stay as clean as when they were cut.  But quilters... we're touchy-feely people.  We like folding back the fabrics to see the prints, to see which ones are duplicated... and okay, to see which prints we probably need more of.

What I have always loved about sewing with Jelly Rolls is that I can remove the ribbon, unroll it and start sewing.  While I like starching, and I have been using Betsy Chutchian's "dryer trick", there are times when I just want to start sewing with a pretty Jelly Roll. 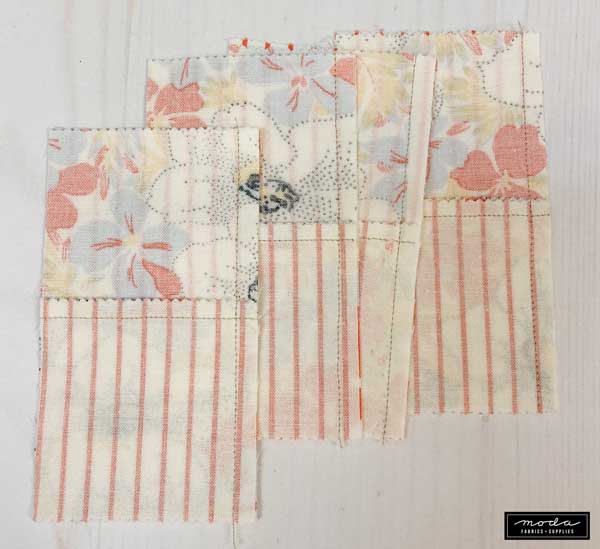 Step 3.  Press the seam in one direction - or "pop" it.  (It's also called spinning, twriling, and opening.)

To "pop" the seam, remove the stitches on the vertical seams just above horizontal seam - where the circle is.  This needs to be done on both sides as there are two seams. 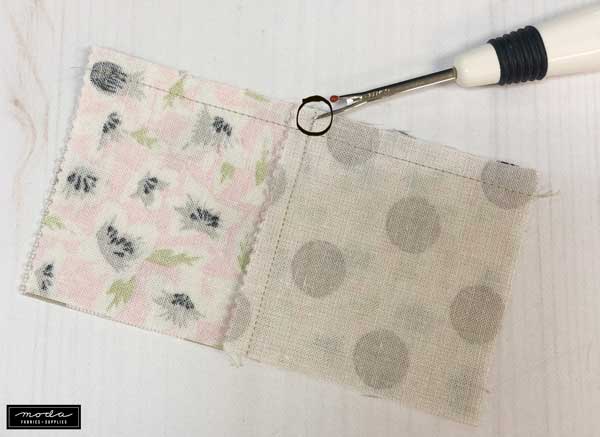 Unless your stitches are teeny, tiny, this can usually be done just by putting your fingers next to the seam junction and twisting them away from each other.  (I couldn't do that and take a picture at the same time.  I have skills but alas, only two hands.) 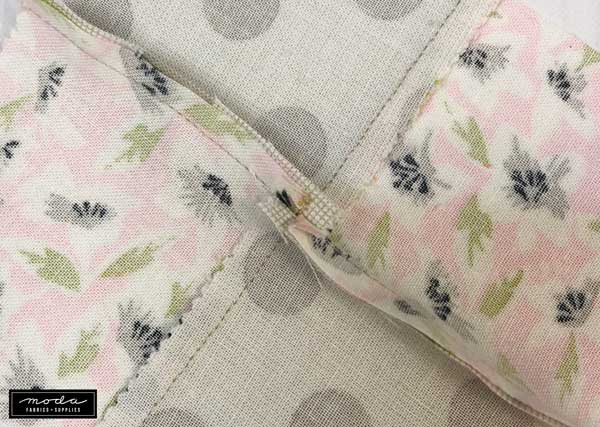 That lets me press the seams this way.  (Clockwise or counter-clockwise doesn't matter so long as all of the four-patches are the same.) (More on that in a minute.) 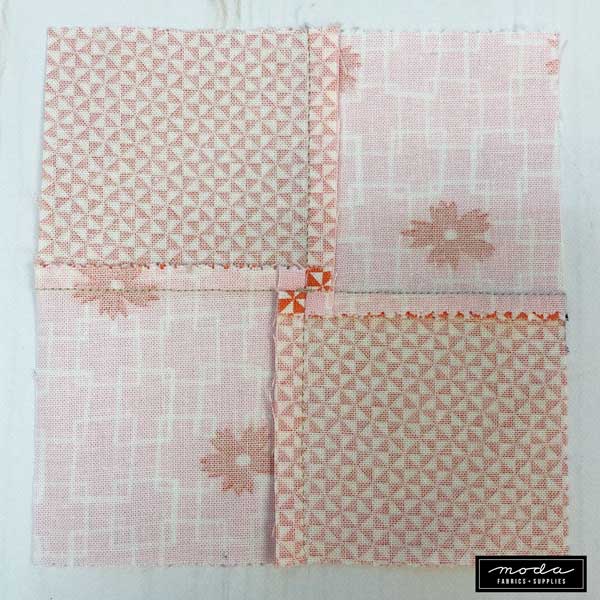 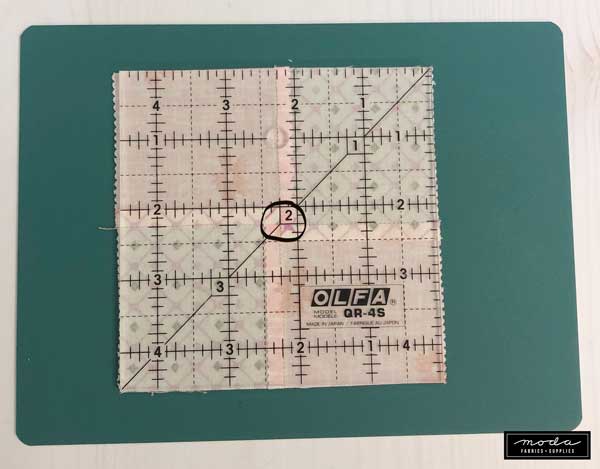 After making hundreds of Jelly Roll four-patches over the years, I've found that even when the trimming trimming only trims off the pinked points, that straightens the edge enough to make joining the four-patches easier, and more accurate. 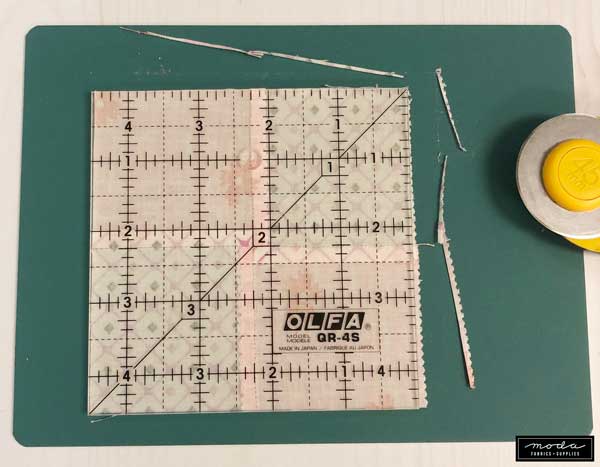 Trim the remaining two sides.  And that's it, they're done!

Caveat.  Sometimes... life.  If your four-patches will be more consistent trimmed to 4-1/4" x 4-1/4", do it.  And adjust the remaining pieces accordingly.  Been there, done that.

Direction.  Clockwise or counter-clockwise.  This is the result of how the segments are stitched - seams "up" or seams "down" - as the segments are being joined, what is the alignment of the center, horizontal seam.

This is "seam down".  The piece on the left shows how it looks as it's being stitched - the center horizontal seam is pointing down, away from the presser foot.  After the seam is popped, and pressed, the seams are going in a counter-clockwise direction. 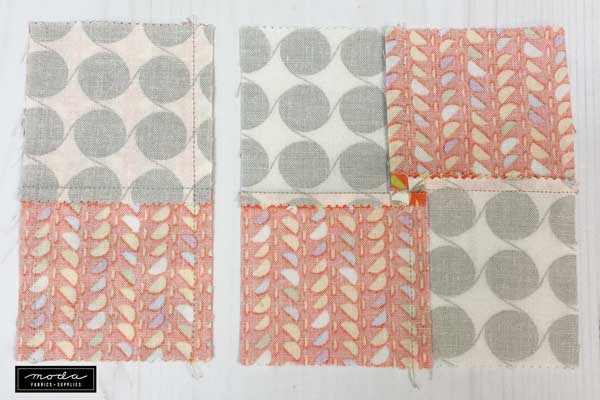 This is "seam up".  As before, the piece on the left shows how it looks as it's being stitched - the center horizontal seam is pointing up, toward the presser foot.  After the seam is popped, and pressed, the seams are going in a clockwise direction.  (As sloppy as it looks on the back, it looks just fine on the front. lol) 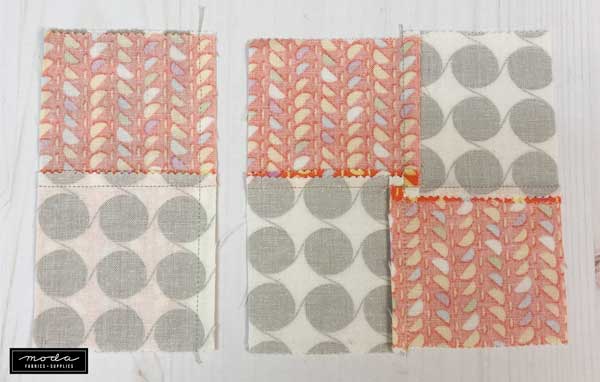 Seam up or seam down is usually a matter of preference, the by-product of whether you pin, how much you press, and so on.  I like seam up because I find that it helps bump the two seams tightly together, probably because I don't pin as much as I probably should.  (As evidenced by those perfectly matched strips.)

Whichever way works for you, just be consistent.  Piece all of the four-patches the same way, so that the seams are all turning in the same direction.  Por quoi?  Doing this will mean that four-patches can be joined together and the seams will always abut, no matter how they're turned.

As for what I'm making with these four-patches, I'm not sure yet.  But I have an idea, and it if works, it might be a Project Jelly Roll pattern for next year.  Stay tuned.

That's it for Jelly Rolls for today.

Wait, there is one last thing.  Someone teased me recently about always capitalizing the J and the R for Jelly Rolls.  Why?  Because Jelly Roll is a registered trademark for Moda.  When it was invented-created in the Fall of 2006, the rolls 40 2-1/2" strips started a trend that's been rolling for fourteen years.

I think that's why there's a National Sew A Jelly Roll Day.